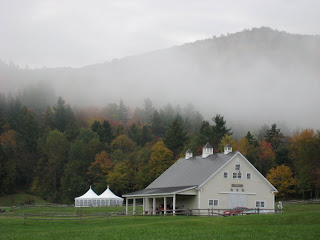 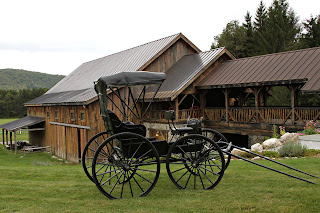 
“And so their search began. They clipped newspaper ads and hunted for barns. They sought out country real estate agents. On weekends, they cruised the byways of upstate New York and the New England states, all without success until the day they boarded a plane for a western ski vacation. A magazine left on their seat lay open to a picture advertising the 300-year-old Riverside Farm in the heart of Vermont ski country.

If Joe and Courtney Desena, the proprietors of historic Amee Farm in Pittsfield, Vermont, don’t seem like typical innkeepers, it’s because they’re not. Only seven years ago, they were the model Manhattan couple: smart, young sophisticates living in the city and working in the fast-paced world of high finance.
Nor is Amee Farm a typical inn. It retains the architectural charm of a traditional New England farmhouse built about 300 years ago – which it is — but within its historic exterior there’s up-to-date technology that reflects a contemporary respect for sustainable ecology that includes geothermal heating and soy insulation. And Amee Farm’s garden is organic. 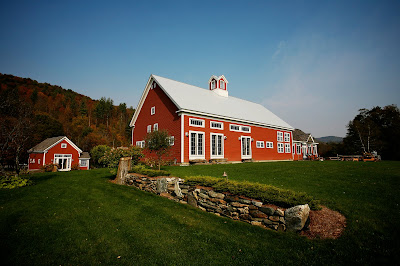 Just as rigorous are the standards for hospitality. Guests
have a choice of double, queen or king-sized beds dressed in
organic sheets. Private bathrooms are outfitted with
organic towels and organic toiletries.

The genesis for Amee Farm also is organic. It grew naturally. Before Joe and Courtney decided to marry, he asked, “How do you feel about old barns?” His beautiful, dark-haired bride-to-be listened as he told her that his childhood in upstate New York had nurtured an enduring fondness for old barns. If she agreed, he wished to be married in one.
Courtney and Joe visited the New England Village of Pittsfield, population 427, and the historic farmstead, one of the first dwellings in the Green Mountains region. They fell in love with the decaying barn that begged for TLC. The covered bridge was a plus. The combination was irresistible.
But when their parents saw it, they shuddered. The neglected property was a disaster. How could a couple of young city-dwellers possibly cope with the extensive repairs and maintenance the decrepit buildings required?
Undiscouraged, the engaged couple went ahead and purchased the 300-acres with the dilapidated house, crumbling barn, bridge, and outbuildings. For a year, they devoted themselves to rehabbing the barn. And when they were done, Joe’s wish came true. They married in the meadow, then danced and dined with guests in the handsomely restored barn. Townsfolk talked about the beautiful barn and romantic wedding for months.
After a honeymoon in India, the newlyweds returned to the city. They planned to use the barn as a weekend retreat, a ski house for nearby Killington in winter, a country home in summer.
One day Courtney opened the barn door to a woman she did not know. “I’ve heard that you host lovely weddings here,” said the stranger. Before Courtney could correct her, the woman continued. Her daughter was being graduated from nearby Bennington College and had set her heart on a country wedding. “We’d like to rent the barn,” she said.
Courtney was about to explain that the barn was not available for rentals, but Joe, who overheard the conversation, encouraged her to consider the idea. Courtney had researched caterers, florists, ministers, photographers, and transportation for her own wedding. She had a bulging file of local resources. Before she knew what had happened, she found herself planning the Bennington College grad’s wedding.
Word got around about the weddings at Riverside Farm and other couples asked to marry there. Soon Courtney had made an unintended career change and was busy as a professional wedding planner. The new trade was good for the local businesses and the town. Courtney found it increasingly difficult, however, to coordinate the many details of Vermont weddings from New York.
Vermont beckoned. With each stay, their barn had become more special. Courtney and Joe packed up their belongings and moved to Pittsfield. Joe restored one of the outbuildings on the farm for an office and, thanks to the Internet, manages investments from Pittsfield. They also restored two small houses on the farm. One is a feminine bride’s cottage decorated with local crafts. The other is the groom’s house, a rustic cabin where guys can put u

p their feet and not worry about beer bottles leaving rings on the furniture.
When Courtney and Joe noticed that historic barns around New England were disappearing faster than they could be preserved, they began a rescue effort. They hired craftspeople familiar with traditional building techniques to dismantle the antique barns, number the boards, and to resurrect the barns at Riverside Farm, where they are meticulously maintained. Now couples have a choice of four barns for their wedding.
To accommodate guests, Joe and Courtney also restored nearby Amee Farm, preserving its charming architecture in a green building. Each guest room is uniquely furnished in casual luxury with antiques Courtney personally selected. It is another way of recycling.
She also purchased the work of local artists and artisans. Award-winning chainsaw artist Barre Pinske, whose carving of a bear the U.S. Government presented as a gift to the Russians on the signing of a treaty, constructed much of the furniture. Whenever possible, he recycled fallen trees and other discarded wood on the property. Expressing his witty sense of humor with a board he found in the cow barn that was scarred by hooves of cows, he attached four legs and carved cow feet at the bottom. It’s now a comfortable bench beside the sitting room fireplace. He also designed and made the custom headboard and the wardrobe in each of the twelve guest rooms.
The Amee Farm art gallery showcases local talent. On opening nights, there’s a wine and cheese reception for the artist and guests. It’s a taste of Manhattan in Vermont. Like Courtney and Joe Desena, Amee Farm brings together country charm and city chic.” 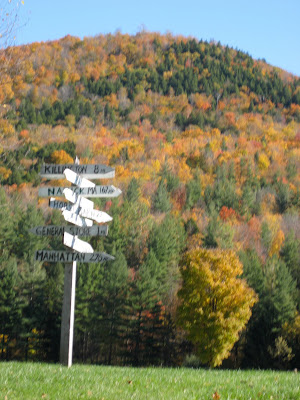 Shirley Moskow traded  work as a newspaper editor for the life of a footloose freelancer. She writes for magazines and newspapers about her two passions, the arts and travel. Currently, she’s putting the finishing touches on her third book, first novel.